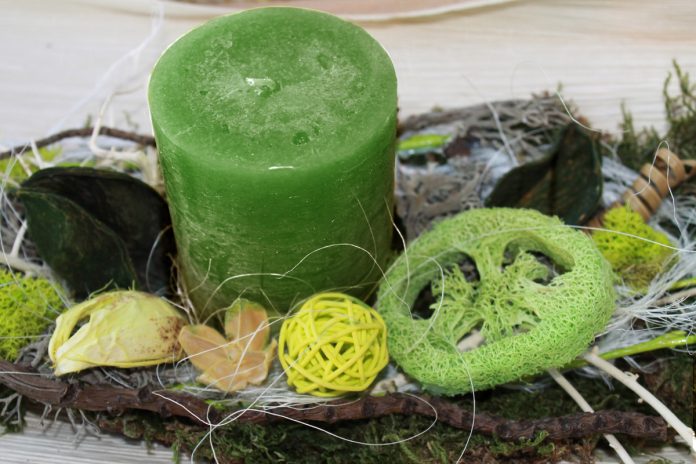 When colonial families settled on the Eastern seaboard, they set about on their “women’s work”. Each day, the women of the house were responsible for the cooking, cleaning and care of the home. In late fall, as the animals were slaughtered, women would begin making candles for the following year. The average home would require approximately 200 – 400 candles to illuminate the home for a year. Tallow, or animal fat, was collected throughout the year, but slaughter always brought more fat to the home. As candle making was grueling and smelly work, the bulk of it was done in a single day.

Tallow can be quite foul after a few weeks. Imagine how much worse it must be after several months! In more affluent homes, the women would make candles from beeswax or bayberry wax, as the aroma was far sweeter than anything an animal would leave behind.

Women would gather bushels of bayberries and boil them for several hours. This heating process allowed the waxy substance to seep from the berries. As the wax has a natural buoyancy, the wax floated to the top of the kettle. Once the wax cooled, it was skimmed off much the same way we skim chicken fat from cooled broth today. It takes approximately 15 pounds of bayberries to render one pound of wax. Bayberry wax is brittle by nature, and prone to “blooming”, which is a white powdery residue that forms on the outside of the candle after several months. Candles had to be stored in a cool flat place to protect their fragile shape.

Over time, chandlers made their rounds, relieving women of the chore of candle making. Eventually, molds and paraffins were developed to replace tallow and chandlers altogether.

Bayberry has seen a resurgence in popularity over the last 100 years. Mabel Baker, founder of Colonial Candle of Cape Cod (later PartyLite, a division of Blythe HomeScents, Inc.) made her mark in the early 20th century making hand dipped bayberry tapers. Unfortunately, the company no longer offers candles made from genuine bayberry wax.

Colonist folklore states that if you light a new bayberry candle on Christmas Eve, you’ll have health, wealth and prosperity in the coming year. The adage reads:

A bayberry candle burnt to the socket brings food to the larder and gold to the pocket.

This holiday, look for taper candles made with genuine bayberry wax. The sweet, grassy aroma is a pleasant holiday fragrance. Burn one taper on Christmas Eve, and ring in a new year of health, wealth and prosperity!

Lisa Robbin. Lisa writes articles on all things candle related in an effort to educate consumers about making the most out of their candle purchases.

Mexi-Canadian Poutine with Veggies and Avocados