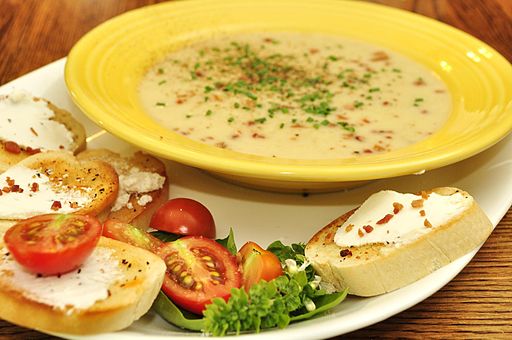 I was not very fond of having soup before meals. But, once I tasted a potato soup at my friend’s weekend party and I simply fell in love with its wonderful taste. Since then, soup has become an integral part of my meals. Soup is a popular and nutritious appetizer and starter. It is made from a combination of different ingredients like vegetables, meat and various spices. These ingredients are added in boiling water to form a broth. It’s a wonderful experience to enjoy a tasty potato soup, sip by sip, during the cold winter evenings.

Since potato is a favorite vegetable among most people, potato soup has become extremely popular all over the world. With their high content of complex carbohydrates, potatoes are a good source of energy. They are also rich in proteins, fibers and vitamin C. Among a variety of tasty potato recipes, potato soup is a unique dish. Potatoes can be a great addition to soup. You can use potatoes to thicken a soup, instead of using flour or cream or ‘half-and-half’. Potatoes can also add volume to a soup. If the soup is over-spiced, then potatoes can be used to extract excess spices. Here are some delightful, easy homemade potato soup recipes.

Scrub and bake potatoes at 350 degrees F for about an hour and keep them aside. In a heavy soup pan, mix together flour and butter to prepare a roux. Then, add milk and allow it to thicken. Following this, add chicken broth. Add 2 large, cubed potatoes to this mixture. Add pepper and salt to taste and serve hot. If you wish, you can garnish the soup with different toppings like bacon, cheese or chives.

In a large pan, combine together potatoes, onion and salt. Add water and cover the pan. Once it starts boiling, reduce the heat and allow it to simmer for about 12 minutes, until the potatoes and onions become tender.

Remove potatoes and onions from heat and mash them in a blender, until smooth. Then, put potato and onion puree into a skillet and heat it. Add butter and half-and-half to it. Allow it to become hot over medium heat. Take care that it should not start boiling. Following this, add cheese and stir, until it melts. Garnish it with parsley and serve hot.

With these easy homemade potato soup recipes, you can make a variety of delicious potato soups for the weekend parties or family dinners, and provide a nutritious treat to your family members and friends.

You have found the perfect recipes you have been looking for. It’s time to start making them for your own dining pleasure and that of your family and friends.

My name is Sandy Wind and I’ve been eating and making Homemade Potato Soup for over 20 years. In that time, I’ve gained a huge amount of knowledge about Tomato Soup Making. As a Tomato Soup enthusiast, it is my goal to see that all Tomato Soup lovers are making their own Tomato Soup, so I’d like to share my knowledge with you.