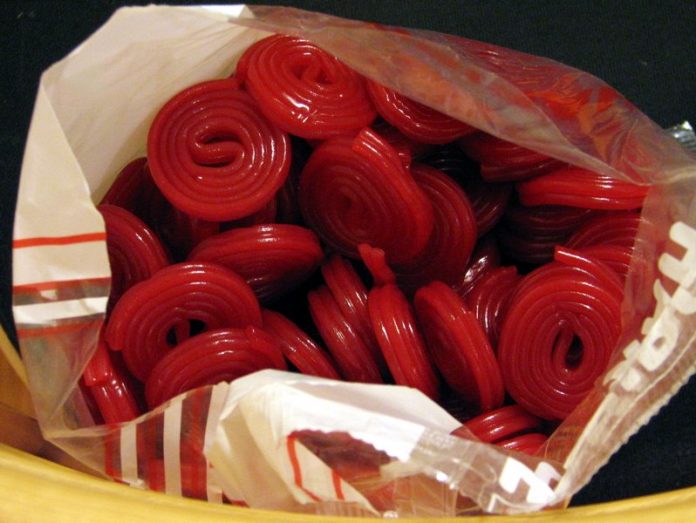 You probably don’t give it a second thought as you browse the candy isles, but some of those delectable confections actually wouldn’t exist – if not for the presence of a shrub – and, most likely, someone who planted, cared for, and harvested that shrub. This article will add to your knowledge of the shrub named Licorice, sometimes spelled, Liquorice.

It’s an herbaceous plant, a flowering perennial whose flowers are purple to light blue in color. Classified as a legume, its closest relatives are beans and peas. Its fruit is an oblong pod that contains seeds. In Northern India, it’s called “Mulethi”, where it’s used for varied purposes. In parts of Italy, its root is dug up, washed, and chewed as a breath freshener. The Chinese use licorice as a spice to flavor broths, sauces, and other culinary delights. It’s used to flavor soft drinks and tea, as well. Licorice is even said to help people lose weight.

The sweetness of licorice comes from “Glycyrrhiza” in the root. The unique flavor comes from “anethole”, which is an unsaturated ether compound. This compound is also found in anise, fennel, and a few other herbs. The plant requires a well-drained area and favors valley locations that get full sunlight, for best growth. Harvesting normally takes place in August after two to three years of growth. The roots are crushed to extract all the useful elements, and until recently, those remains were then discarded. A process has been created, though, to make this product into chemical wood pulp, which is pressed into a strong high tensile-strength board for construction.

Native to Southern Europe and Asia, this botanical shrub (primarily, the root) has been used for its healing properties for eons. It’s known to affect the body’s endocrine system, to play a role in metabolism, and affect the brain, especially in regard to age related mental decline. It’s used for its healing properties in the treatment of stomach and duodenal ulcers, leaky gut syndrome. Irritable Bowel Syndrome, and Crohn’s Disease. It’s also used to treat a spasmodic cough, Lupus, Rheumatoid Arthritis, and animal dander allergies. In Japan, it’s used to treat and control chronic viral Hepatitis, and the Chinese use it to treat Tuberculosis. It is also believed to have some impressive anti-viral qualities that through continuing study may give hope for cancer patients.

But, does Licorice, as a cure-for-all-ailments, sound just too good to be true? Should you dash out right now to stock up at your local homeopathic supplier, ensuring perfect health from this point forward? Well, “NO”, probably not, because along with the research extolling the virtues of Licorice comes some fairly dire cautions. Such as, “do not take [medicinal-strength] licorice, if you have heart failure, heart disease, fluid retention, high blood pressure, kidney or liver disease”!

Clearly, self medicating with the medical-strength licorice herb without being properly monitored, as with any other herb or medical compound would be risky, possibly to the point of being life threatening. However, purchasing licorice candy to eat in prudent amounts is normally considered to be within bounds, and has been participated in with pleasure for many, many years.

This is merely a summary of the history and properties of licorice, and is not backed by extensive doctorate level research. Its intent is to provide some interesting nuggets of information for conversational use, or as a brief personal overview of this topic. Nothing within this article should be interpreted as medical advice. It is advisable to do your own research or gain approval from a licensed medical practitioner before making any health or dietary decisions.

There are several varieties of licorice candy, and they’re often distinct to particular countries around the world. One of the better known is Kookaburra, from Australia. Licorice can be purchased sweet, salty, red, sugar-free, gluten-free, kosher, and, even peach.

Black Jack Licorice is a brand that’s been around since the 1800’s. And, there’s also Black Crow Licorice, Haribo, Running Rabbit, Red Vines, Altoids, and Twizzlers. Just to name a few of them.

Kay Coolidge is the Proprietor of Popsies Popcorn, Ice Cream and Sweets