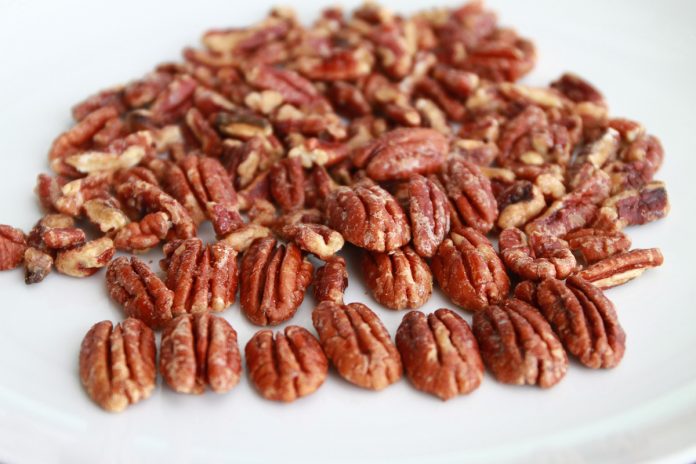 There are so many kinds of nuts in the world. One of those is Pecans, a smooth brown nut with an edible kernel similar to a walnut, obtained from the hickory tree Carya illinoensis, native to the southern US. It grows in natural groves in bottom lands near rivers or lakes with nearby periodic overflowing water.

The shape of pecan nuts is highly variable, some are oval shaped and some are long and skinny. The size of the nuts can be as small as a pencil eraser or as large as 1.5″ inches in diameter to over three inches long. The kernels can vary in size within the hull; some filling out poorly or some not filling out at all. Some pecans have a kernel density so compact that the shells can be broken while the nuts are still on the tree by the swelling pressure that is generated from within, especially after heavy rains at the end of the ripening season.

This kind of nuts has so many benefits to the mankind, according to the study that it promotes heart health and lower cholesterol level and were reported to contain higher antioxidants than any other nuts, followed by walnuts and hazelnuts. Antioxidants help to prevent, repair, and reduce oxidative stress a mechanism that interferes in healthy body functions by damaging cells that can lead to the formation of cancer, heart disease, Alzheimer’s Disease, and Parkinson’s Disease.

Pecans have a very high concentration of Vitamin A that protects teeth, eyes, and bones, as well as benefiting general health. Because of recent interest in nuts as a healthy food, sales of pecans and other nuts have skyrocketed. Pecans offer a delicious, healthy nut to world markets with profitable financial rewards to those who choose to plant and market the product.

There are so many menus you can made out of this nuts. One of the example of is candied pecans which very delicious and easy to prepare. The first step of making this is preheat oven to 300°F. Second step, brush large rimmed baking sheet with butter. Third Whisk egg white in bowl until foamy. Add sugar, spices, and salt. Whisk until mixture is thick and opaque. Add pecans; stir until coated. Using forks, transfer nuts to sheet, spacing apart; discard remaining coating. Bake nuts until deep golden brown, about 35 minutes. Cool completely on sheet. Transfer to container; cover and store at room temperature.

The following are the ingredients of candied pecans:

Its not only nuts but candy. Every can enjoy eating it. By trying some of its other menus, surely you will love the pecans. So try it now and enjoy the taste.

Season of The Soul

How to Create a Beautiful Porch for Fall