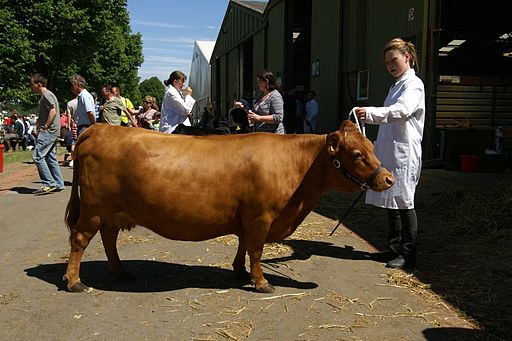 My friend Wayne and I were discussing livestock over a few rounds of coffee the other evening and he suggested the possibility of raising a few cows. Since my mini-farm is only two acres, I thought that the idea of a cow was a bit of ridiculous thought and laughed at the idea. Wayne went on to explain that the ideal cow for a small farm or homestead would be the Dexter bovine.

Well, it didn’t take me long after I got home to begin investigation of these little wonders and boy was I ever so surprised. After glancing at the various specifications pertaining to this breed of cow I was totally amazed at the diversity displayed by this 36 inch high animal. The Dexter cow is considered to be one of the smallest breeds of cattle in existence and usually measures a mere 36 to 44 inches to its shoulder, According to my research these cows are the perfect family animal. They are gentle, versatile and above all economical.

These creatures are the perfect size for the small homestead or the emergency retreat. Armed with only one such cow you can expect to obtain anywhere from one to two gallons of milk daily. This is generally a perfect amount for the small farming family. When compared to the common Holstein which delivers eight to ten gallons daily this cow is the perfect solution for families with light milk consumption. In the event you wish to raise the bovine for its fine beef you will need only about 400 pounds of freezer space rather than the usual 600 to 800 pounds that would be expected with the its full size cousins.

→ How To Take Care Of Cows – Tips For Beginners

The Dexter cows are believed to have originated in the country of Ireland and during the early 20th century they were imported into various regions of America. Over the last ten years the use of Dexter cattle has been continually growing for the small livestock grower here in the United States.

All is not peaches and cream (pun intended) with the Dexter breed however since due to their small size they have developed genetic disadvantage. The smallest of the breed is subject to genetic disorders which causes the cows to experience stillborn births with deformed faces.

With that said your children will readily take to the Dexter as they would any small animal. Raising and caring for the cow will provide your children with hours of fun and entertainment as they provide the animal with love and attention as only a child is capable of. Dexter cows are easy to maintain and can be taken care of effortlessly by the most inexperienced “want-to-be” farmer around. They have the capability to be trained as a beast of burden skilled in pulling a plow or a small wagon with ease.

The meat from a Dexter cow is considered to be some of the tenderest beef available with an excellent natural flavor. A grain feed Dexter will yield you approximately 250 pounds of freezer meat at 12 months of age. Their feed consumption is a mere 5 to 7 pounds of grain daily.

So as you can see having a Dexter cow can be beneficial to you as a small homesteader or as an addition to your retreat location. Before deciding to purchase a dairy goat, please give some serious thought to this small but durable bovine breed.

Joseph Parish – For more information relating to survival visit us at http://www.survival-training.info