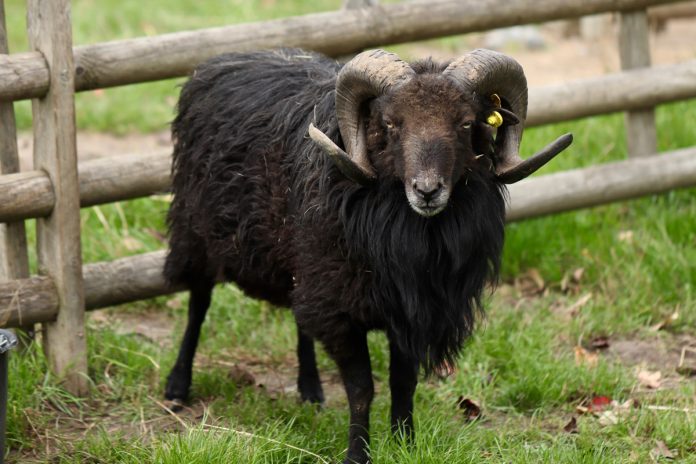 Stories from the past on a farm are rich in history and humor. So, I thought I would share a few. 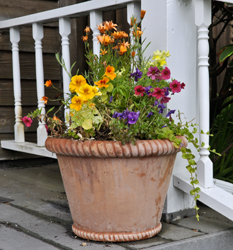 One told to me by a couple now living on the Peninsula follows. These new owners had a barn, part of a historic farm, that they had purchased when the acreage was split up. They were in the process of cleaning out the barn that had not been in use for quite some time. Daisy, who had inherited the farm in the early 1900’s was still living in the house on the farm. Grandma Daisy, as she was called, wandered over from the house to see what the couple was doing. She was way up in years, as they say, but had a strong voice. “Save the spiders!” she called out to Ken and Teri. She repeated it several times, and the couple, thinking Grandma Daisy was having some trouble with reality, promised they would. However, they were puzzled as to how they would catch and keep those little, black, eight-legged arachnids when they caught them. Later, they learned that the “spiders” Grandma was referring to were “black cast-iron frying pans originally made with short feet to stand among coals on the hearth” (Taken from Webster’s Dictionary) Ken said that neither he nor Terri found any spiders from Grandma Daisy in that barn. 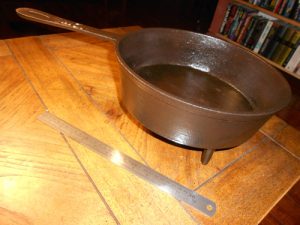 A life long resident of Old Mission Peninsula, Cal, had some good stories. I believe that he must have been a bit of a rascal when he was a kid. The stories follow. He remembers that Barry and he took Barry’s mother’s new white sheets, made parachutes from them, and jumped off the roof of Mr. Umlor’s barn. It seems they had been quite impressed by a local outdoor movie they had seen, presumably a war movie showing pilots baling out of their airplanes. They decided it didn’t look too hard, if maybe just a bit risky. They are here today, Cal believes, because they landed in a manure pile up to their armpits.

One more story Cal told me about growing up on the farm took place when he was young, about 10 years old. Some buddies and he decided to disassemble a barn wagon and reassemble it on top of the Mapleton School, a one room school house still standing today. They worked hard on this project for hours. When they came down off the sharply peaked roof, they were met by Cal’s dad and the local sheriff. For all their jolly good fun, they had to bring the wagon back down, like they took it up, and reassemble it on the ground. Then they took it home!

This story dates back to 1900. While not too much was known about certain families in the early days, some good stories live on. It seems a Mr. Swaney died at the age of 56. In those days it was the custom for several members of the family to “sit up” with the deceased, that is to stay awake all night in the same room with the body. Being an unseasonably warm night, a window above the table where Mr. Swaney laid was opened a crack. Along into the wee hours of the night, the men keeping watch started to nod off and tilt back in their chairs. About that time a neighbor’s goose decided to stick its neck into the window and let out a horrendous bellow. It is said that in the mad scramble to get untangled from their chairs and get out, all three men got stuck in the doorway trying to get out of the room!

Another story dating around 1900 was told by Mr. Lyon. “Back in 1900 my Grandpa Lyon came from Sweden to settle on the land, and, of course farm. He needed money which he did not have to pay for the land. Mr. Hannah, the local lumber baron loaned him the money to pay for it. Grandpa agreed to work for Mr. Hannah at the sawmill. He walked to town six days a week to work off the loan on the farm of 40 acres. It took him two years. Then when Grandpa became more prosperous he loaned money to help the start of Rennie Oil Company in Traverse City!”

A local newspaper in Traverse City reprinted a story in 1986 that was first printed one hundred years earlier. It concerned an incident on a farm on the Peninsula. I quote the newspaper article. “Mr. Tompkins, the father of several of the neighboring farmers, while passing through a field owned by Mr. Brinkman, was attacked by a ram. He was knocked down and badly used up. Because he is an old man, his injuries may be serious.” According to one story Mr.Brinkman put a ram in his plum orchard to ward off the Tompkins families who Mr. Brinkman claimed were stealing his plums as they walked from their farm to the dock at Haserot Beach, and, were selling them to the ships that came in. Mr. Brinkman wanted to put a stop to that.

The story about the arrival of the Wilber family to the Peninsula is a good one. A son wrote about it. “After a long tiring trip we reached our destination. My father was to be the manager of the Illini Orchards Company which had 100 acres of orchards. This was March 1918. Mr. Marshall (a neighbor) told us that when we got our goods unloaded, we should come and have dinner at his house. He told us that while the house had been vacant, he had tapped the maple trees around the house to make maple syrup, and we would find a half dozen pails of sap in the house, which we could just dump out. After the goods were unloaded, Dad built a fire in the stove to warm up the house. A little later, my brother went upstairs and noticed that in one room the wall was warm and red. Dad rushed out to the woodpile and got an axe. He chopped into the wall and found fire. The water to the house had not yet been turned on, but we did have those pails of maple sap, which we doused on the fire to keep it from spreading. This gave us time to open up a rainwater cistern and dip out water to finish the job.”

Another good story happened on the Marshall farm, pioneers on the Old Mission Peninsula. One of the Marshall sons who now owned the farm, married an attractive school teacher named Grace, who ion the course of time was to have two more husbands. Grace so loved her farm that she always returned to the farm with her new husband. Grace never wanted to leave the farm, but as her health deteriorated, she was forced to go to a home in Traverse City. Shortly before she died in 1986, she asked to be driven to the farm one last time to say goodbye, such was her attachment to the beautiful spot. Leaving no heirs when she died, it was purchased by an owner who did not choose to live on the property.

When the Chowns bought the farm in 1994 the property had fallen into disrepair. They have put an incredible about of work into restoring the house and the barn. After moving into the house, and for several years thereafter, strange things kept happening to the home. This story is told by Rebecca Chown. “Household items would move around, strange noises would occur, and various lights as well as the stove would go on and off without any odd weather, or anything else, to account for the disturbance. Old timers on the Peninsula told us the house was haunted and that many tradesmen on the Peninsula refused to enter the home to work. While I am not a brave person, it was obvious that the presence in the house was friendly, one that simply wanted to be noticed. Little by little as we improved the home, the frequency of the strange occurrences decreased.

One day as a neighbor’s father was experimenting with a new metal detector at the Chown’s, he found a gold wedding band buried in the gravel driveway. (Remember Grace was married three times.) The gold band fit Rebecca’s finger perfectly, and after that there were no more signs of the ghost. The Chowns like to think that Grace is satisfied with them and can now rest in peace, since the love she felt for the farm is reflected by its current occupants.

Frances Carroll McCaw reminisced with fond memories of living on a farm on the Old Mission Peninsula. “In the 20’s a tall tower was built just down the road from our farm. It was called the Grand View Observation Tower, but was always known by the ‘natives’ as Frederick Tower. There was a pipe at the top of the tower running down to the ground where you could drop coins for the privilege of climbing the tower. (It was four stories high with a magnificent view of both bays on Old Mission Peninsula) The Carrolls would collect money at the end of the day. We used to gather at the tower. It became a social gathering place for young folks. There was a concession stand at the bottom of the tower. For 5 cents you could get pop, ice cream, or candy. Many downstate people came to climb the steps to the top of the tower. It was THE place to hang out after a long day of picking cherries. I was a bit of a rascal, and remember climbing to the top of the tower one time and drinking a coke and taking 2 aspirins. It was supposed to get you drunk. But I waited…..and nothing happened. It didn’t work!”

I will end with a story, probably a fable, about life ‘in the country’ when the roads were so often impassable that the early automobiles were not of much use, more of a nuisance. In the ’20’s those that were ‘lucky’ enough to have an automobile found the hilly terrain of the Peninsula made it hard for these vehicles to navigate. They were often forced to back up the hill as the lowest, and most powerful, gear was reverse!

In the spring the roads were deep muddy ruts, summer, it was dust, and in winter, well they were simple put in the barn up on cement blocks. As they ‘didn’t go in the snow’.

One fine day a proud driver was escorting a guest to town down one of our hilly, curvy trails when he heard from an on coming vehicle calling out in a loud voice “Pig! Pig!” The road was narrow and the oncoming driver was indeed taking up more than his share of the road. The incensed, driver yelled back “Hog! Hog!” and let the inconsiderate jitney pass. He then careened around the curve at top speed and ran into the biggest pig he had ever seen. This was most likely the beginning, and consequence, of road rage.