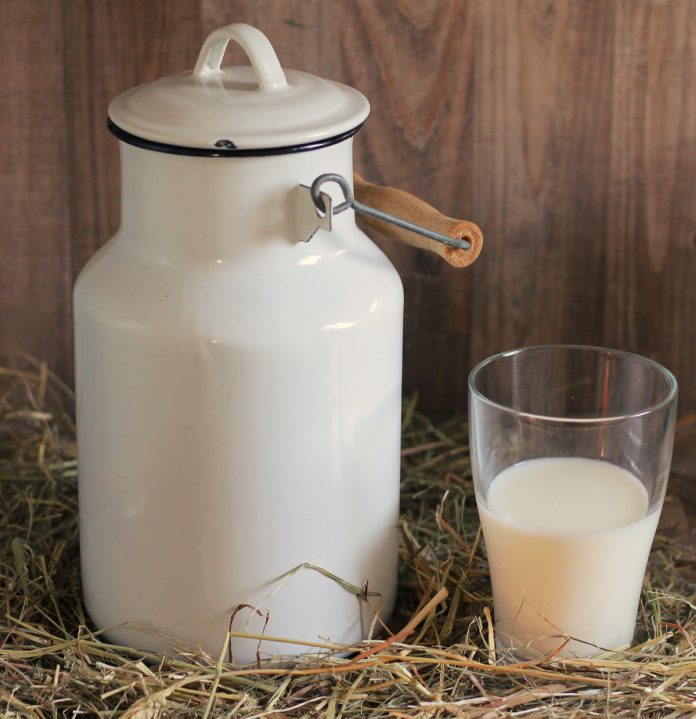 It has been used both in the daily diet (often fermented) and by special groups with extra nutritional needs, like the elderly, pregnant or nursing women, warriors, and sick people. An ancient Babylon text tells how raw milk was used to drive out the demons of sickness, “Bring milk and laban that man become as pure as laban; like that milk may he become pure.”(1)

A portion of raw milk was drunk fresh and warm from the cow (or other animal), but a lot of it was fermented, or cultured, into a variety of delicious products – yogurt, kefir, cheeses, lacto-fermented beverages, etc. – due to both the lack of refrigeration and primitive people’s knowledge of the health benefits of “probiotics”.

As early as the 1800’s, we have documented texts of medical doctors using a diet composed exclusively of raw milk to heal an incredible variety of diseases – ranging from asthma and diabetes to colitis, obesity and tuberculosis. How does raw milk work to heal such a variety of very different disorders?

Many of my readers who have gone on The IBD Remission Diet (an elemental diet used to induce disease remission) also found that a variety of other illnesses cleared up at the same time. This is one of the reasons I refer to the time on the Diet as a “healing spa”. If the digestive system is the foundation of health in the body, and natural healing heals the entire body holistically, then of course you are going to see positive results in all aspects of your health. All of your organs and systems will heal and balance, over time, given the necessary tools. An elemental diet – and raw milk is truly the first, original elemental diet, provides the body with the tools to heal holistically.

In his book, The Untold Story of Milk, naturopathic physician Ron Schmid writes:

“According to late 19th century proponents, the ‘secret’ of the milk cure lies in the fact good raw milk is a food the body easily turns into good blood. In illness there is one or both of two conditions in the blood: insufficient quantity, or abnormal quality. The milk diet corrects both and, acting through the blood and the circulation, heals the cells and thus the tissues and organs. The muscles on a milk diet harden, almost like an athlete’s, because they are pumped full of blood, as are the organs.”(2)

However, there are some rules that need to be followed. As with The IBD Remission Diet, there are some crucial guidelines that need to be implemented to have success with the raw milk cure. Some of the doctors who used the raw milk cure with patients in the 1800’s through to the 1930’s used raw milk in conjunction with mild, easily digestible foods like fruit. But the vast majority swore by the need to consume only fresh, raw milk, and vast quantities of it.

One of the most prolific of these doctors, Charles Sanford Porter MD, published a book called, Milk Diet as a Remedy for Chronic Disease in 1905. In the book he relates how at least 18,000 patients had been on the raw milk diet under his care in the last 37 years. This was not some fad diet, or quick-flash trend. This was a solid, scientifically proven method for healing mild to severe disorders. In 1929, one of the founders of the Mayo Foundation (forerunner to the Mayo Clinic), J.E. Crew MD reported that he had been successfully using the raw milk treatment for the last 15 years. He said, “The results obtained in various types of disease have been so uniformly excellent that one’s conception of disease and its alleviation is necessarily changed. When sick people are limited to a diet containing an excess of vitamins and all the elements necessary to growth and maintenance, they recover rapidly without the use of drugs and without bringing to bear all the complicated weapons of modern medicine.”(3)

The great thing is that many medical doctors in the U.S., Russia and Germany published their work and results using raw milk diets from the early 1800’s to early 1900’s, so we have good guidelines for implementation. Personally, from my experience with elemental diets and the rationale behind them, I agree with the majority of doctors who found that if you mixed other foods with the raw milk diet, it was not nearly as successful. The only other food I think you could mix with raw milk and perhaps see an added benefit from is clear homemade bone broths – boiled from organic meat and bones. I say this both because I have an intuitive sense that this would be okay (and perhaps add to the healing power of the regime), and because homemade bone broths have been very beneficial for people on The IBD Remission Diet.

Rules For The Raw Milk Cure

After perusing the writings of various doctors who worked extensively with raw milk treatments, here are the crucial implementation guidelines if you’d like to give the raw milk diet a try:

The importance of strictly adhering to these guidelines is summed up in the words of Dr. Charles Sanford Porter, MD:

“It is wrong, if not positively dangerous, to attempt the exclusive milk diet on any amount of milk less than that required to noticeably stimulate the circulation and promote body growth. There is no halfway method of taking the milk diet for people who have much the matter with them. Enough milk must be taken to create new circulation, new cells, and new tissue growth, and cause prompt elimination of the waste and dead matter that may be poisoning the system. With milk alone, digestion and assimilation may go on throughout practically the whole length of the alimentary canal. The addition of even a cracker to the milk seems to cause the stomach to hold all its contents for hours without discharging much into the intestine.”(4)

How Long Do I Stay On The Diet?

Now you may be wondering how long you can safely stay on a raw milk diet. Amazingly, there is no limit. Raw cow’s milk from pasture-fed cows is a complete, perfect food all by itself. In his book, The Untold Story of Milk, Ron Schmid ND, relates numerous stories of people who lived in perfect health for up to 50 years on raw milk alone. Here’s just one of many examples; this is a letter from a man in Burlington, Iowa in 1913:

“I have lived on a strictly milk diet for the past forty-two years, not as a matter of choice, but from the fact that I am unable to take solid food of any kind, even a crumb of bread. At the age of two I took a dose of concentrated lye, which caused a stricture of the food pipe and since then have lived on a milk diet. I believe I have gotten along better than the man who eats. I am five feet, six inches tall, weigh one hundred and forty pounds, and am married and have four strong, healthy children. I take one quart at each mealtime and none between meals. My health is good, in fact I have never been ill in forty-two years.”(5)

Dr. Schmid goes on to give many different examples of people who have had excellent health living on nothing but raw cow’s milk for 3 – 50 years. This is very liberating information! Imagine if elderly people in nursing homes were given raw milk instead of Boost, Ensure and processed foods? Imagine if people with obstructions and strictures were given raw milk, rather than surgery, or having their colon removed?

How to Introduce Raw Milk

People with inflammatory bowel disease (IBD) and irritable bowel syndrome (IBS) are often very hesitant to try raw milk due to bad experiences with pasteurized milk and sensitivity to milk proteins (keep in mind these proteins have been denatured by the pasteurization process). So what’s the best way to start and test whether you can take advantage of this amazing superfood? Here are the guidelines I’ve used with myself and my children (who were not allowed to drink pasteurized milk) to introduce raw milk and test for tolerance:

Before we found a source of raw milk, my kids would occasionally have a glass of pasteurized milk at a friend’s house. And within half an hour they would have a bowel movement. Now keep in mind that my kids are perfectly healthy, with one formed bowel movement per day. If pasteurized milk affects them so negatively, imagine what it does to an already compromised digestive system? Raw milk is completely different. My kids drink as much raw milk per day as they wish and they still have only one formed bowel movement per day. I drink raw milk straight, eat raw milk cheeses, raw milk yoghurt, and make a shake from raw eggs and raw milk, and I’ve never felt better! If you’d like to source a raw milk supplier in your area go to: www.realmilk.com There are also lots of useful articles on the site if you’re worried about safety issues, legalities, etc.

1. Barton, George A. Encyclopedia of Religion and Ethics, pg 635.

Traditional yoghurt recipes call for the milk to be heated to 180 degrees Fahrenheit, however, this destroys the beneficial enzymes present in raw milk. Therefore, I prefer to not heat the milk beyond 110 degrees Fahrenheit (43°C). However, this usually results in a runny yoghurt (not firm). If you’re going to use your yoghurt in shakes, smoothies or lassis, this is fine. However, if you prefer to eat firm yoghurt, you will need to add gelatin to help firm it up. So the recipe here includes gelatin, but if you’re okay with runny yoghurt, then follow the recipe as is, minus the gelatin.

1. Pour 4 cups of milk into a saucepan and sprinkle gelatin over surface of milk. Let sit for 5 minutes while gelatin dissolves.

3. Put the yogurt starter into the wide-mouth quart-size sterilized glass jar. Pour in about 1/2 cup milk and stir to mix really well with the starter.

4. Fill the jar with the rest of the milk, stir lightly, and screw on the lid.

5. Wrap the jar in a towel and let sit in a warm place*, for eight hours.

6. Unwrap and place in the refrigerator. Allow yoghurt to set in fridge (about four hours). If you want an even firmer yoghurt, next time add 1.5 or 2 teaspoons of gelatin.

Note: Do not mix fruit or sweeteners directly into your main batch of yoghurt, as this will interfere negatively with probiotic activity and potency during storage. However, it is perfectly fine to scoop out a portion of yoghurt and mix in some fruit, jam, maple syrup or honey immediately prior to eating – just don’t mix these in with your main batch that remains in the fridge.

Yogurt and You – Alternative Remedies

Jini Patel Thompson is an internationally recognized expert on natural healing for digestive diseases. She healed herself from widespread Crohn’s Disease and has remained drug and surgery-free for over 19 years. A former journalist, her health articles have been published in magazines and journals in Canada, the U.S., U.K., and Australia. Her books, CDs and DVDs are available at: http://caramal.com/