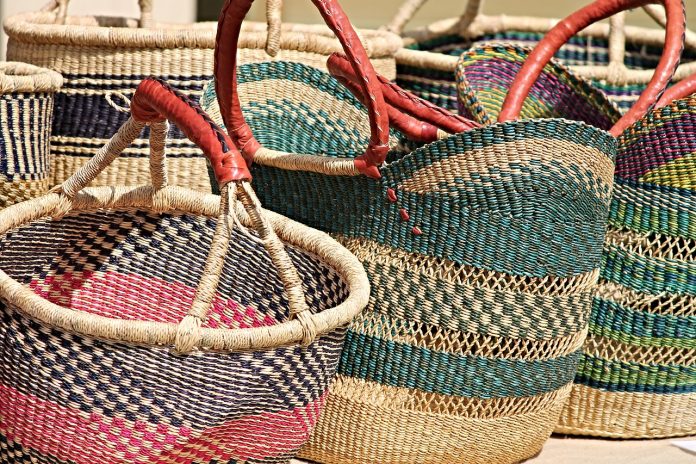 There is a fascination about coloring one’s own material that only one who has proved it can understand. As an artist mixes his colours, one dye after another is tried until at last a fortunate blending gives the desired shade. Solid extracts of vegetable dyes are sold which simplify the process; or, if one lives in the country, hedgerow dyes are plentiful for those who have eyes to see and patience to use them. If one does much dyeing, rubber gloves are almost a necessity, and a brass preserving kettle will be found useful. If small quantities of material are dyed at a time half- worn basins or saucepans of medium size will do. Wash the rattan and raffia, especially the latter, in soap or soda and water and rinse thoroughly before dyeing. One of the secrets of even coloring is to boil the dye slowly, leaving the material in it for hours. In this way full deep colours will be obtained even on rattan.

A beautiful shade of Indian red is made by boiling the material slowly for six hours in the following solution. Two tablespoonfuls of cutch extract and a small crystal of blue- stone (about as much as would go on a ten-cent piece) dissolved in one quart of boiling water.

Green from Indigo and Fustic

Mordant the material to be dyed with alum (three ounces of alum dissolved in a quart of water), and dye in a solution of one tablespoonful of indigo and a small crystal of copperas in one quart of boiling water. When the desired depth of colour is obtained remove the material, wash the loose dye from it and dye in a fustic bath (one quart of water in which one tablespoonful of fustic has been dissolved) to the shade required. Instead of fustic, bark extract may be used. If a brighter shade is needed, add one or two tablespoonfuls of alum mordant to the bath.

Soak the material in a bath composed of one tablespoonful of copperas in one quart of water for half an hour. Then boil in a fresh bath of one quart of water in which one tablespoonful of bark extract, three quarters of a teaspoonful of indigo and a piece of logwood extract the size of a pea have been dissolved. Let it simmer for several hours or until the desired shade is obtained. The same proportion of dye in two quarts of water will give light shades.

Boil the material slowly in the following solution for several hours. One tablespoonful of cutch extract to one of fustic in one quart of water.

In one quart of water dissolve one to two tablespoonfuls of madder. Do not allow it to boil, but leave the material in it for five or six hours, just below the boiling point.

More on making baskets at