Native American cooking and recipes cover a broad spectrum. From the east, south, west and northern regions each with their own indigenous food sources. This article covers the Western Plains Indians, specifically Lakota (Sioux). Many techniques and methods of cooking are not used today except on rare occasions when a ceremony would require it. In ceremony, the food is cooked outdoors over hot coals or buried in the ground over hot coals. Originally, cooking vessels were rawhide containers.

Heated stones were added to the mixture to heat. Most meat and produce were dried. So this method worked well since the ingredients were dried there wasn’t any “cooking” per se, just a heating of ingredients. Most foods were eaten raw or dried, since the process of building a fire is time consuming and uses a lot of wood. The dried foods were not dull or lacking in flavor. They were mixed with other ingredients. An example of this is what many people know as “Pemmican”(pimîhkân). In Lakota it is called “Wasna” (Was-nah). 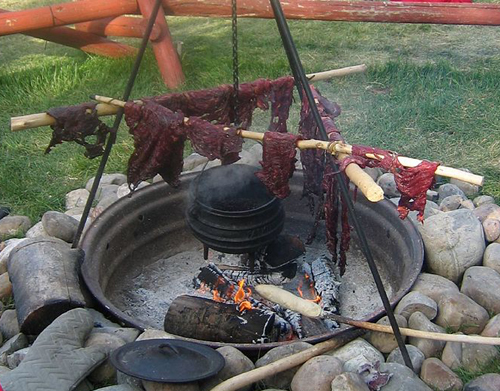 Wasna is also a traditional food for sacred ceremony. When prepared for ceremony there are specific methods and actions required.

The following is the traditional recipe for making this wonderful and tasty food called “Wasna”. (Wa means anything,  sna means ground up)

Put dried meat in a pillowcase and pound with a hammer until very fine. (or use a food processor) Put the pounded meat into a bowl and mix in the choke cherries or raisins or dried fruit and sugar. Heat the kidney fat, suet or lard until melted.

Cool until you can handle it with your hands and not burn yourself. Pour enough fat or lard into the meat mixture to slightly moisten and mix well. You want this mixture to stick together only a bit for ease of eating. Eating is done with a spoon or pinched into the hand.

(Editor’s note: Has a long shelf life of several years if stored in air tight containers or vacuumed sealed. Keep in a dark, cool place.)

read: 5 Recipes by People Who Call the Outdoors Home

Oregano seems to have become popular in the U.S. after World War II when the