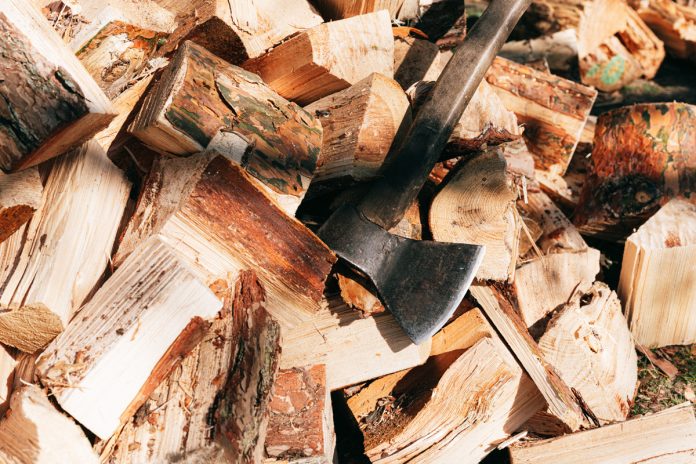 Many people attempt to cut up timber for their log-burning stoves – but how many really know the time-honoured secrets practiced by the real experts? I will reveal the simple technique that I learned in Norway back in 1974, which will remove a lot of the stress and injury from this underestimated pastime. The sharpness of the axe is not important, by the way!

Just before I get into the details, I have to explain that, at the tender age of 18, with my friend Will (now a respected doctor), I worked on a dairy farm near Trondheim in Norway for about three months. There were twenty-six cows and ten pigs. Very little English was spoken. Einar, the farmer, showed us how to chop up logs within a few minutes of our arrival.

Whenever anyone came to visit, the womenfolk would look through photograph albums indoors, while the men would assemble in the farmyard and compete with each other in manly log-chopping contests. The techniques described below are those used by real Norwegians.

· First you need a chopping block – this is a big section of log which you are not going to chop up, but on which the main chopping will take place. It’s worth spending a bit of time finding a good one, which won’t fall apart. It must be bigger than the other logs, and the top and bottom should be sawn parallel.

· In Norway we chopped up quite big sections of log (quite heavy to pick up) (up to a foot each way) using a great big heavy axe. Back home in the UK I use a small one-hand chopper and much smaller logs, which I chop into little pieces for kindling, but the technique is fundamentally the same.

· Choose the log you want to chop. It’s easier with a straight-grained log without knots. Place it on the chopping block with a sawed surface horizontal on the top. Look for a split in that sawn face, from the outside to the middle. That split is your target.

· Bring the axe (or chopper) swiftly down onto the split, so that the axe head becomes firmly embedded in the log, where the split was. The blunt part of the axe head should now be sticking out of the top of the log by two or three inches, maybe more.

· It is possible that the action described above might just chop your log in two. If that happens, so much the better. However, the point is this: you are not trying to bisect your log by bringing the axe down onto it. And you won’t need to pull the axe head out and try again unless you missed your target. Read on…

· This is the clever part, which only Norwegians know about. Pick up the axe, with the log stuck to it, move the log round behind you, and then – in one graceful rotary action (not unlike an over-arm bowl in cricket) – swing the whole thing over your head and down towards the chopping block, while simultaneously turning the axe handle, so that by the time it’s coming down, the axe head is underneath and the log is on top.

· The blunt back of the axe head hits the block and stops, but the log keeps going under its own momentum, and in so doing it breaks in twain. Viola! You have used the log’s own weight to split it, rather than brute force.

· Repeat the process with the resulting smaller sections of log until you achieve the size of segment you require.

· If, like me, you are performing a miniaturized version of the procedure, by this stage you won’t be turning the wood over, as it’s lighter than the chopper. But there are three important things to remember when chopping up little bits:

· Keep splitting the segments of log from the outside to the middle, until they’re so thin that it doesn’t matter any more.

· You won’t need to bring the chopper right down to the chopping block – you’ll only need to slice sharply into the top of each segment and a piece will break off.

· There will come a time when the bits of wood are so small they won’t stay on the block without falling over. Do not use your spare hand to steady the wood, or sooner or later you will lose a finger. Use a scrap of wood to steady the segment.

· In case you’re wondering, I didn’t learn that part the hard way. It’s common sense; it’s better to be safe than sorry, even if it doesn’t seem manly at the time. I have known several people who have cut parts of their fingers off through milling timber, and I don’t think it added anything to their machismo.

PS I’m amazed by the huge number of views this article has had! You can also see my video on the subject on YouTube (filmed by my seven-year-old son). Search for my name or “How to chop up logs”.

Tom Morrell has a PGCE in Music from Homerton College, Cambridge and many years of teaching experience in the UK. For other ideas and to find out how to supplement your humble teacher’s income, visit http://steprightthisway.com