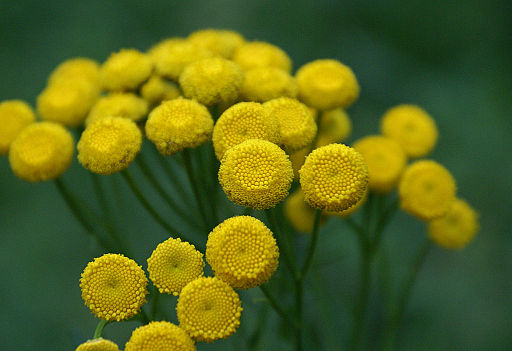 Tansy is a perennial herb, Tanacetum vulgare, and a member of the aster family, Asteraceae. Tansy is also called common tansy or garden tansy in order to differentiate it from similar looking plants.

Introduced from its native Europe and Asia, this herb has established itself in all parts of the United States except some of the warmest states, including Alabama, Georgia, South Carolina, Florida and Texas. It requires temperate climates for successful growth. Where it does grow successfully tansy has become an aggressive weed in some cases. The states of Colorado, Montana, Washington and Wyoming have listed tansy as a noxious weed.

The alternate leaves are pinnately compound with finely toothed leaflets. The leaflets are long and narrow in shape giving the leaves a fern-like appearance. Each leaf has a dozen or more leaflets that are divided almost down to the leaf stem. The leaves are quite aromatic and bruising them releases a strong camphor-citrus odor. Tansy was popular as a strewing herb back in the day.

Tansy blooms are bright yellow composite flowers that appear quite round, which explains the reason for another nickname, ‘golden buttons’. The round appearance is due to the lack of ray flowers in this daisy-like blossom. The flowers appear in loose, flat-topped clusters at the tips of hairless stems during the latter part of the summer. The entire plant gets one to three feet tall and can be found growing along fence rows, in fields and waste areas like roadsides and railways.

Essential oil obtained from steam distillation contains camphor, borneol and thujone. Thujone is toxic if ingested in large amounts. It is a chemical that is also present in wormwood, southernwood and sage. The young leaves were once used as a seasoning substitute for sage, but only in small quantities. People have died from consuming strong teas made with tansy, so take caution and do not ingest this herb.

The strong aroma of the leaves and flowers acts as an insect repellent. Herb and vegetable gardeners use tansy as a companion plant to drive away insects that would otherwise consume the harvest. A homemade insecticide can be made by steeping a handful of dried tansy flowers in a pail of hot water. After an hour or so pour the liquid into a labeled spray bottle and place the flowers under a bush to protect it from aphids. Spray the solution on garden plants and flowers that need protection from insect pests.

Be sure to wash any edible plant materials that have been sprayed before consuming them.

Naomi Gallagher is a writer and a fantastic cook with a love for machines that help her make the most of her time in the kitchen, like the trusty bosch stand mixer [http://boschstandmixer.com/]. Learn more about using culinary herbs by visiting use that herb, where Naomi serves up a number of articles about culinary, medicinal and crafty herbs.